1. Scenario One:
My cousin, let’s call her M, came down to visit the extended family this weekend, and she brought her two kids. She used to live just south of the city where I live, and so we’ve spent a good amount of time together in the past few years (including staying overnight with her toddler while her second was being born). It’s been a change, because they lived hours and hours away when we were kids – we got together once a year for our family’s beach week.

She and her husband have given us some baby items over the past few years. I had never really discussed our baby making plans with her, but she knew we wanted to have kids; we were just vague on the timeline. We were talking on the phone on Friday, and for some reason, I decided to open my trap about what’s been going on (or not) with my uterus (MISTAKE). What follows is our exchange about my misadventures:

SARAH: …so, after all that, we did get pregnant once. Unfortunately it ended in an early miscarriage. I was pretty upset about it. Still am.
M: Well, you know I had both of mine early.
SARAH: [frantically trying to remember if M has ever told me about a miscarriage before] M, you had miscarriages? I’m so sorry! When was this?
M: No, I mean I gave birth to both of my kids early. Technically I’ve never carried a baby to term.
SARAH: …

Yes, M did have her kids early. Her first was a month early, and her second was six weeks early. I don’t want to take away from the fact that it must have been incredibly scary for her to go into labor before she was expecting to. But both of her kids are FINE. Neither of them had to stay in the NICU. Neither of them have any problems as a result of being born early. Both of her kids weighed over 7lbs when they were born. So let’s recap: M, two pregnancies, two healthy kids. Sarah: 1 pregnancy, zero kids. TOTALLY APPROPRIATE TO COMPARE.

Scenario Two:
I have an aunt, let’s call her Aunt L, who lives in the same city as I do. She is my Mom’s late brother’s wife. I have a long history with her, as I lived with her and my uncle when I first moved to the city. Even after I moved out of their house, I stayed in the neighborhood and we hung out a lot. I was also her favorite as a kid. She would invite me over for a sleepover, while pointedly excluding my sister (which, as an adult, I can see is totally fucked up. As a kid, I thought it was awesome). Anyway, that’s all to show you why I put up with her incredibly insensitive comments. Shortly before Tammy and I had our first IUI (almost a year ago, OMFG) I told Aunt L that we were going to be trying. I sincerely wish that I hadn’t said anything, because she asks every single time she sees me – including at Christmas when she GRABBED MY STOMACH and asked if there were any babies in there.

Anyway, when I saw Aunt L this weekend, she asked how the baby making was going and I told her that we were doing IVF next month. Here’s how that exchange went:

SARAH: …so we’re going to do IVF next month.
AUNT L: Oh, you don’t need that!
SARAH: Actually, to have a baby it looks like I do. I’ve talked with my doctor about it, and this is the best way forward.
AUNT L: You just need to relax! I know TONS of people who adopted and then got pregnant right away!
SARAH: Actually, that’s an old wives’ tale. And, even if that were the case, we can’t exactly try at home.
AUNT L: [not listening] You know what you should do? I saw this program on Anderson Cooper a while back, where men donated sperm for free! Like, you just meet them somewhere and they hand you some sperm. You should try that!
SARAH: Ummm. I like my sperm disease free, thanks. Also, sperm is not the issue. There’s something wrong with me, but we don’t know what. My doctor said it’s unexplained.
AUNT L: Oh, I don’t believe in all that!
SARAH: … Yeah, my uterus doesn’t believe it either (??) 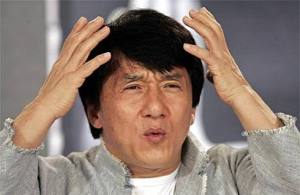 Look, I get it. People don’t know what to say about a reproductive system that doesn’t work…quite…right. People are uncomfortable talking about sex in general (throw in LESBIAN sex, and let’s not even go there). We like to genteelly ignore the whole P in V aspect (if that’s your kind of dish) and just focus on cuddly cute babies. But infertility and ART forces people to discuss it, and people seem to lose what little tact they possessed to begin with. For an added bonus, throw in a little miscarriage – wheee!!! NOW we’re having fun!

Fuckin’ A, man. Family. I was trying to be open about our struggles to help end the stigmatization of infertility. Clearly I didn’t do so well for team IF. I didn’t say anything rude in response, but that was only because I was so busy scraping my jaw off the floor. I fear that next time I’ll actually get something out, and it might not be pretty. Any suggestions on how to handle these kinds of comments in the future?